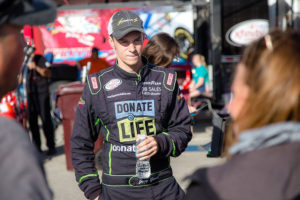 The picture of a Newton teenager, who died four years ago when he was hit by a vehicle, will be featured on the hood a race car in Saturday’s XFinity Series race at the Iowa Speedway.

“It’s a complete honor for us to be featuring Brendan O’Brien on Joey’s car,” Hakes said. “Brendan was a donor in 2013 and we’ve been working with Bob O’Brien and his family for the last few years. They’ve done a lot of great things to promote donation.” The race car was on display Thursday outside the Newton Fire Department, where Gase encouraged supporters of organ donation to put their handprints – in paint – on the hood of the car.

“It gets a lot of people involved and it turns a lot of heads at the racetrack,” Gase said. “On Saturday, when you see this car on TV, it’ll be pretty cool to say ‘hey, that’s my handprint on there.'” In addition to O’Brien’s picture, a picture of Gase’s mother is featured on the hood of the car. Mary Gase died suddenly of a brain aneurysm in 2011 and her organs were donated. Joey Gase, a Cedar Rapids native, has since been a leading advocate for organ donation. Tomorrow’s XFinity Series Race will be televised nationally on NBC.

(Thanks to Randy Van, KCOB, Newton/photo courtesy of the Iowa Donor Network)