You are here: Home / Health / Medicine / Iowa GOP chair had surgery to remove nodule on a vocal cord 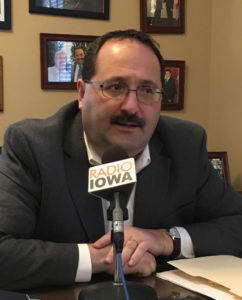 The chairman of the Iowa Republican Party is widely known for his high-volume speeches, but he’s under doctor’s orders to try to protect his voice.

There are a wide variety of classic Jeff Kaufmann vocal performances. For example in May of last year, to counter the “NeverTrump” movement among some conservatives in his party, Kaufmann began shouting to the crowd at a party fundraiser.

The audience responded with shouts, cheers and whistles.

For the past few years, Kaufmann has been the master of ceremonies and chief cheerleader at innumerable Republican Party events. During a Donald Trump rally in Cedar Rapids in June, he lambasted Nebraska Senator Ben Sasse for failing to support the Republican president.

“Donald Trump won this state. The citizens of this state gave him that victory. If you don’t like it, tough!” Kaufmann yelled.

Kaufmann’s closer during his brief speech that night was a booming question.

“How many of you stand with Donald J. Trump tonight?” he yelled.

And the crowd roared.

Years of these exhortations took a toll, though. Kaufmann developed a deep, non-cancerous nodule in his throat. He had surgery on one of his vocal cords last December.

“It was probably the three hardest days of my life, when the doctor said I couldn’t talk,” Kaufmann told a crowd last week.

Kaufmann admitted he lasted just a day and a half before tossing aside the marker and wipe-erase board he was using to communicate with his family. For several months after surgery, Kaufmann went to a speech therapist.

“If I’ve heard the phrase once, I’ve heard it a dozen times: ‘Breathe from your stomach,'” Kaufmann said last week during an interview with Radio Iowa. “I’ll be honest. I don’t even know what that means…I think I’m just going to lower my noise level just a little bit.”

Julie Andrews, the soprano who reached vocal heights in memorable roles on stage and screen, underwent surgery two decades ago to remove nodules from her vocal cords — and she was unable to sing afterwards. Kaufmann said he’s never been able to sing, so that’s not a concern. He’s stopped going to the speech therapist and has adopted this approach to his vocal health: “I’m going to just lower it down, keep my fingers crossed and make sure everybody can hear me.”

But after his return to a rigorous schedule of speaking engagements, Kaufmann’s doctor warns the nodule may be coming back.

“But some people have said my kind of scratchy voice is kind of sultry and it’s good for engaging voters, so I’m going to do with that,” Kaufmann joked last week.

Kaufmann also earns a paycheck with his voice. Kaufmann teaches history and government classes at Muscatine Community College. He’s also a livestock farmer and a member of the Cedar County Board of Supervisors.