You are here: Home / Agriculture / Governor Reynolds on threat North Korea nukes may have on trade 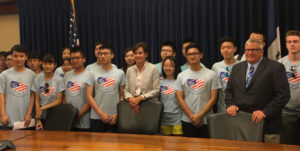 Governor Kim Reynolds predicts there’ll be expanded ag trade to China in the years ahead, but Reynolds said this morning that Iowa exporters need to monitor how North Korea’s nuclear ambitions could impact trade with China.

“They are walking a fine line in China,” Reynolds said during an interview with Radio Iowa and The Cedar Rapids Gazette. “They’re sending troops to the border. They don’t want North Korea to have nuclear capability either, so they’re monitoring that.”

China also worries that if North Korea’s dictatorship topples, there would be a unified Korea under a democratic system of government. Reynolds returned to Iowa this past Friday after a trade mission to China that was solely focused on expanding shipments of Iowa agricultural products to China. Former Governor Terry Branstad hosted an event for the Iowa trade delegation at the U.S. Embassy in Beijing. Reynolds was able to meet privately with Ambassador Branstad, too.

“I have complete confidence in him,” Reynolds said. “It’s a tough assignment. He recognizes that. It started with sending arms to Taiwan and some of the legislation that’s coming out of Washington, D.C., so he is continuing to balance the needs of the United States and working with China.”

This weekend President Trump tweeted that China had done “nothing” but talk about dealing with North Korea’s nuclear threat. Trump made the U.S. trade imbalance with China a major 2016 campaign issue and the president said in his Saturday tweet that “foolish past leaders” of the U.S. have allowed the Chinese “to make hundreds of billions of dollars a year in trade.”

Governor Reynolds said she saw signs of progress on trade during her trip, including the Chinese decision to allow four new varieties of genetically-modified corn and soybeans into China.

“But we said we need to complete the other four. It was really important that we have some consistency, predictability, timeliness in the approval process and we said both on our part as well as their part because that’s what’s going to allow us to feed a growing world population,” Reynolds said. “They’re estimating that by 2020 they’ll have another 300-400 million Chinese that will move into the middle class.”

Iowa Agriculture Secretary Bill Northey was also part of the Iowa delegation that went to China this month. He said there’s “no way” to predict how the North Korean situation will “play out.”
“We’re hopeful that the North Korea tensions can get worked out and trade continues to improve with China,” Northey said during an interview after a meeting with the governor and the rest of the State Executive Council.

A group of Chinese students who’re in Iowa and plan to attend high schools and colleges here posed for pictures with Reynolds and Northey this morning in the governor’s office.