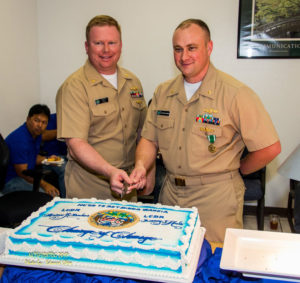 A Hawarden native is making waves nearly 10,000 miles away on the small Island of Diego Garcia.

U.S. Navy Lieutenant Commander Jeremy Huls became the officer in charge in May of the computer and naval support facility in the British Indian Ocean.

He says their headquarters is in Japan and they are one of eight sites around the far east that handles communications for the Navy, Air Force and all of the coalition partners. Huls oversees 95 people at the communications support facility which serves around 3,500 people.

“And that doesn’t include all the ships and aircraft that come through the area,” Huls says. “We cover all their communications, classified and unclassified systems. And we also cover a lot of other government agencies that work in the area doing government operations over here.” It is a unique assignment far away from family.

“No family members are allowed on the island — strictly military and contract personnel — and we get 12 months to come out and perform our agendas out here,” Huls explains. He says you can ask for a second year on the island, but that is rare due to its distance away from everything. Huls has been in the Nave for 16 years and prior to this assignment he was on the Dwight D. Eisenhower in Norfolk, Virginia. Huls says their goal is to improve the communications, facilities and operations on the island that includes a project for the Department of Defense.