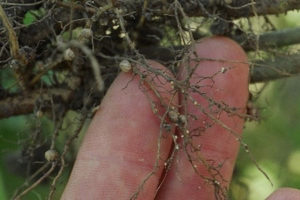 Soybeans that are genetically-bred to resist a certain type of destructive pest are becoming less effective, according to an Iowa State University nematologist.

Greg Tykla says the threat is growing to one of Iowa’s top crops from what’s known as the soybean cyst nematode, or SCN. “Ninety-seven percent of those resistant soybean varieties contain the same resistance genes and in some respects, resistance genes affect SCN much like herbicide active ingredients affect weeds, it basically is resulting in the death of the pest.”

Tylka says the same thing is happening with soybeans and the insect. He says the less effective resistance is becoming an alarming trend that’s not expected to improve. “Literally, 3% of the 900 varieties that farmers can pick from in Iowa that are resistant to SCN, 3% of them have a resistant set of genes that is not the common resistance genes,” he says. “Almost everything that comes to market has this common set of resistance genes.” Most of Iowa’s counties are seeing a very dry year, so damage from the SCN will be even more apparent.

“Farmers need to know that if they used to manage SCN with resistant soybean varieties, that is no longer working as well,” Tylka says. “They need to consider collecting soil samples to get a feel for what their numbers are. They certainly need to rotate with non-host crops like corn.” Tylka hopes that will buy enough time for companies to bring to market soybean varieties with other sources of resistance.