You are here: Home / News / Pheasant numbers expected to be up as annual survey gets underway 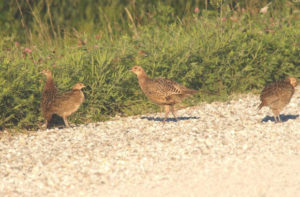 The DNR is driving Iowa roadways to get a count on pheasants.

An annual survey of the state’s pheasant population was launched Tuesday and will continue through the middle of this month.

Todd Bogenschutz coordinates the survey for the Iowa Department of Natural Resources. He suggests this could end up being the highest statewide pheasant count since 2006.

“If we see a 40 percent increase like we did in 2015, I think that would be true,” Bogenschutz said. “That’s kind of what we’re hoping for I guess, but we’ll have to see.” In 2015, the statewide pheasant count increased by 40 percent following a mild winter. Much of the state had very little snowfall this past winter, which likely resulted in good hen survival.

“We brought more hens into the spring and more hens putting eggs down always gives you good potential,” Bogenschutz said. Iowa’s statewide snowfall average for this past winter was 20.4 inches, but most of the snow fell over northwest and north-central Iowa. Sections of central and southern Iowa received snowfall totals that were up to a foot BELOW normal. Bogenschutz says the pheasant hunter numbers in Iowa have increased as the bird numbers have improved.

The roadside pheasant population survey runs for 15 days. Data is collected from 208 30-mile survey routes around the state. In addition to pheasants, the survey also collects information on cottontail rabbits, jack rabbits, quail and Hungarian partridge. Results of the survey will be released in early-to-mid September.

Photo courtesy of the DNR