You are here: Home / Sports / Hawkeyes already benefiting from preparation for trip to Europe 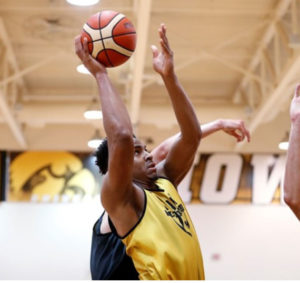 Ahmad Wagner goes up for a shot.

The Iowa Hawkeye basketball team is preparing to travel to Europe for a 12-day trip.

Coach Fran McCaffery spoke with reporters about the trip and says they were allowed 10 practices to prepare.

“It was great to be able to get everybody together because we were able to use the other time available for skill development. So, then we had practices and then we had skill development sessions,” according to McCaffery. “And I think that was incredibly beneficial, because even though we have a lot of guys back we still have a lot of young guys. So, I think that’s important.”

McCaffrey says they have had to spend some time working on the rules of the European game, which he says are dramatically different in some cases.

“What we consider goal tending they don’t. What’s a travel over there is not a travel here — and we run, so we are susceptible to more travels — can you get your mind to understand that,” he says.

There’s also a big difference in the type of ball they will use. He says some of the guys really like it and some don’t. “That’s all we’ve played with for two months, so they are getting used to it.” McCaffery says.  He says they will face some good teams, but he’s not concerned about the wins and losses.

“We’re just going to try to really, truthfully focus on what do we have to do to get better,” McCaffery says. “Obviously we are going to try to win. But if you win or lose, nobody will even remember it. It’s not as critical as getting quality playing time for our young guys trying some different things on the court. Just work on our motion game, work on our press.”

McCaffery says the experience gained on this trip will pay dividends this winter. “You know my experience has been in the past has been that the teams that have this opportunity have always jelled and played well the following year. “They’ve just come together,” McCaffery says. “So that’s probably as important a component of this opportunity as any other. Maybe more.”

Iowa will play a total of four exhibition games in Germany, Switzerland, and Italy. They leave for Europe on Sunday.