You are here: Home / Sports / Cyclone coach not predicting wins or bowl game, looking for improvement 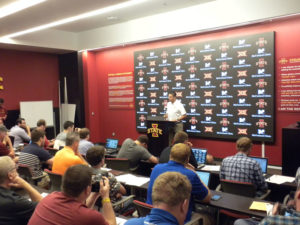 Iowa State football coach Matt Campbell is in his second season in Ames and says the biggest difference in opening fall practice this year is knowing what he has.

He says there was apprehension last year as they were only six months in and were not trying to create trust and belief among the players, but also trying to figure out what the players could and couldn’t do.

Campbell says they’ve also had more than a year now to be with the players and teach and work with them. “And that to me is the essence of a football program. It’s not just go recruit guys and get good players here — its’ really develop those people within your walls and give them the tools and resources to have sustained success,” Campbell explains. “I think that we feel really comfortable even though we’ve only been here now a year-and-a-half, that we’ve been able to give some of those tools. and it’s been fun to watch some of our improvement.” 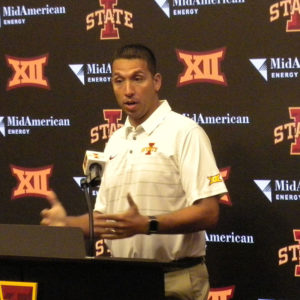 He says there are a lot more people involved in the program than when he was at Toledo and a big key is that everyone now is on the same page. He says the one word to describe it is alignment as everyone now is aligned to the same vision.

“As we came in here, whether it was players, whether it was strength and conditioning, athletic training, nutrition, academics, all of us are together, unified, going in the same direction,” Campbell says.

Campbell isn’t predicting a number for season wins or that the team will get to a bowl game. “You know really for me the future of the program has zero to do with wining and losing. My humble opinion,” Campbell says. “Obviously at the end of it, winning and losing will take care of itself. No greater competitor in this room than Matt Campbell — I’ll cheat in golf if I have to to win okay — but at the end of this, the deal in football wining and losing takes care of itself.”

He says that doesn’t mean they don’t have goals. “Yeah we want to go play in bowl games, yes our goal is to win Big 12 champions some day. But for us to get there we have to learn what the process is and laying a foundation to continue that. I think we’ve laid a good foundation,” according to Campbell.

He says they’ll know a lot more about the team after the first few weeks of the season. “Where are we as a football program? Gosh I don’t know. We are in year two of taking this program over and seeing it, there are lot of young that’re guys playing,” Campbell says. “Does that mean that we can’t win and not have success — absolutely not, that doesn’t mean that. But it’s going to be really fun to see where this program is in four weeks.”