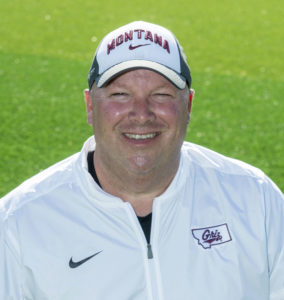 Jamie Pinkerton, whose program-building prowess was well documented at three prior schools, has been named Iowa State’s Head Softball Coach.

Senior Associate Athletics Director Calli Sanders made the announcement Wednesday. Beyond his head coaching resume, Pinkerton is familiar with the Cyclones having served as assistant coach for four years.

“Jamie stood out as a builder of programs,” Sanders said. “His experience in Ames was a bonus but he has methodically improved programs at Tulsa, Arkansas and Montana. Jamie is a relentless recruiter, confident leader and excellent teacher of the game.”

“I am delighted to return to Iowa State and lead the Cyclone program,” Pinkerton said. “Our family loved Ames, so the return is an easy one. However, running my own program at Montana rekindled my desire to do so again. Getting that chance at a Power 5 Conference school, and one that I’m familiar with, is just perfect. I’m very appreciative of the confidence that Calli and Jamie (Pollard) have shown in my vision and abilities.”

Pinkerton left Iowa State after the 2013 season to start a softball program at the University of Montana. For a year, he built a roster from scratch, hired coaches, ordered equipment, assembled a schedule, served a key role in building a facility and laid the groundwork for a Division I program.

Pinkerton was named Big Sky Coach of the Year twice in his three seasons at Montana. His players earned all-conference honors 19 times on the field and 13 times in the classroom over three seasons.

Before his stint as an assistant for the Cyclones (2010-13), Pinkerton was head coach at Arkansas (2005-09). The Razorbacks made the NCAA Tournament his final two years (first time Arkansas made the post-season in consecutive years) and re-wrote the school record book offensively. His Arkansas teams also received academic accolades from the NFCA.

Pinkerton got his opportunity at Arkansas after a highly successful tenure at Tulsa. After three seasons as an assistant with the Golden Hurricane, he was promoted to head coach in 2001. Tulsa registered two 40-win seasons (48-16 in 2002 and 45-18 in 2004) and he was named conference coach-of-the-year both years. The 2002 season was the first winning campaign in program history.

Pinkerton has served on the National Fastpitch Coaches Association All-America Committee from 2008-09 and 2015-present (chair in 2017), the NFCA Coaches Committee as Big Sky representative from 2016-present, was a voting member on the NFCA / USA Today poll and worked as a NCAA Softball West Region Committee member (2003-04).

Jamie earned his history degree from Tulsa in 1997. He and his wife, Dori, have a daughter (Sarah, who attends Iowa State) and a son, Dane.

The hiring is pending a background check by the university.