You are here: Home / Business / Whirlpool looking to hire 500 in Amana 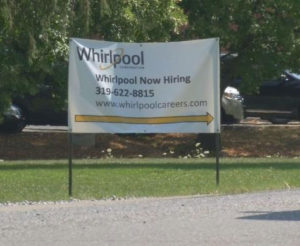 A manufacturing plant in eastern Iowa is planning to add hundreds of employees, but some residents of the small town where the plant is located aren’t too thrilled with the news.

Officials with Whirlpool in Amana say they want to hire at least 500 workers over the next three weeks. Monys Hagen told KCRG-TV she bought Rose’s Bed and Breakfast in Amana two years ago.

“The first year I was here it was a beautiful quiet village. It’s essentially why I bought this place,” Hagen said. In just two years, however, she’s noticed more traffic and litter on the streets. Hagen claims a bulk of the issue comes from Whirlpool workers who are smokers, as Whirlpool is a smoke free campus.

Whirlpool Human Resources Director Christopher Rice says the company needs the extra workers to keep up with demand for its refrigerator products. He told KCRG that Whirlpool is always working to improve its relationship with the Amana colonies.

“Educate our employees…they go spend money in the community, try not to harm the neighbors, etcetera,” Rice said. Whirlpool is also working with the state to solve any traffic issues, according to Rice. That’s something Hagen is concerned about. She says changes are needed to alleviate traffic congestion when there are shift changes at the plant.

“This is not set up for that kind of traffic and it’s not appropriate,” she said. Whirlpool is already the largest employer in Iowa County and the company hopes to hire these 500 new employees by the end of August. The company is hosting what it calls a “recruiting blitz” and is doing in-person interviews and hiring at the Amana plant.