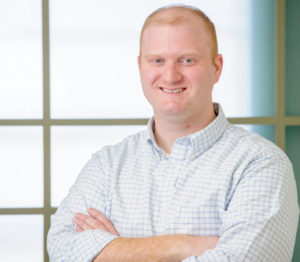 An Iraq war veteran whose name was listed on Iowa ballots in 2014 and 2016 is now aiming to be the top election official in the state.

Democrat Jim Mowrer ran for congress twice and he’s now seeking the Iowa Democratic Party’s 2018 nomination for Secretary of State. Mowrer says there’s “a lot of work that needs to be done” to ensure Iowans can exercise their right to vote.

“It’s something I’ve always been passionate about it,” Mowrer says. “And seeing what’s happening now with the current secretary of state making it more difficult and more expensive to vote.”

Republican Secretary of State Paul Pate helped craft the state’s new law that reduced the “early” voting period in General Elections by 11 days and set up new vertification procedures for voters. The estimated 85,000 Iowans who don’t have a driver’s license or military I-D to prove they’re eligible to vote will have to show one of the new voter ID cards from Pate’s office to cast a ballot.

“It’s going to create lines at the polls and so, top to bottom, this (law) is going to make it more difficult for Iowans to cast their vote,” Mowrer says, “and for no reason.”

Mowrer, who lives in Des Moines, also is faulting Pate for nearly 6000 absentee ballots in Iowa that went uncounted on Election Night last year. The secretary of state’s office discovered the discreptancy in February when reviewing voting records and determined a third of the absentee ballots cast in Dallas County went uncounted because of “human error” in the Dallas County Auditor’s office.

“I’ve voted from a war zone. I’ve jumped through a lot of hoops to ensure that my vote is counted and I’ve gone through a lot of hoops to make sure that other service members’ votes have been counted and those were absentee ballots,” Mowrer says. “And so the fact that 6000 absentee ballots weren’t counted just makes me sick and it’s unacceptable.”

“For me, I don’t think there’s a maximum number of times that I’m going to be willing to fight for the people of Iowa,” Mowrer says. “These are very important issues. I’m not willing to sit on the sidelines and allow this to happen: to make it more difficult for people to vote, to allow votes to go uncounted.”

Another Democrat from Des Moines has been laying the groundwork to run for the same office, so Mowrer will have to compete in a primary next June. A spokesman for the current secretary of state says Republican Paul Pate is “focused on doing the best job he can, not politics” and has not decided whether to seek reelection in 2018.