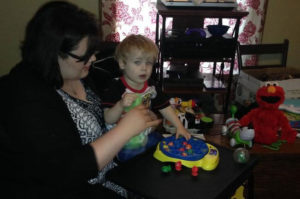 A one-and-a-half-year-old boy is recovering from a serious injury that his parents say was caused by a daycare provider.

RaeEllen Walker of Cedar Rapids believes her son Max’s daycare provider threw the boy because he wouldn’t take a nap. RaeEllen told KCRG-TV she picked up her son from daycare last week and immediately knew something was wrong.

“With every movement I made to try to pick him up from out of the car seat, and into the home, he just clung into my body,” Walker said. A trip to the emergency room confirmed her suspicion.

Doctors told the family Max had a broken left leg. “At his age, it’s the type of injury that’s very hard to do on their own and so that raised a lot of questions,” Walker said. Cedar Rapids Police are investigating the matter.

For now, no charges have been filed. Walker said her son was the only child at the in-home daycare. For the next few months, Walker and her husband are able to change their work schedules to keep Max from returning to daycare.

(Note: KCRG chose not to identify the daycare provider because there are no charges at this time.)