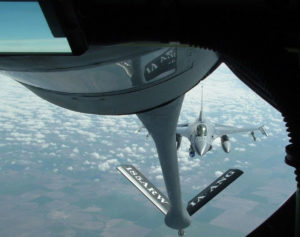 Refueling boom of the 185th in Sioux City.

Colonel Larry Christensen, the base commander, says it’s one of the largest deployments in recent history of the unit and involves two separate entities.

He says they usually deploy the airplanes, crews and maintenance, but this time they are also deploying a lot of the support staff that deal with food service, communication, supply and security that don’t deal directly with the airplanes.

Senior Master Sergeant Ron Bennett says they will start leaving in September and be stationed in countries like Qatar , the United Arab Emirates and Kuwait.

“By the time January of 2018 comes, all 200 will be in their deployed location to do their job for about six months deployed. And then they’ll start cycling them back,” Bennett says.

Members from of the 133rd Test Squadron in Fort Dodge are also part of the deployment. Sergeant Bennett says another 100 airmen from the 185th Operations and Maintenance groups will deploy for 30 to 120 day deployments to similar locations in the Persian Gulf and to support the continuous bomber presence in the Pacific at Andersen Air Force Base in Guam.

He says they will be doing the same job that they do in their weekend training as the Air Force requires them to drop in amongst active duty members and to their standard job.

Colonel Christensen says he greatly appreciates the Siouxland community who employ and support the guard members.

“This actually affects the whole entire community and their families,” Christensen says. “We are just extremely lucky to have the support that the Siouxland community and the family gives us, and they’ve done that for many, many years.” The 185th will continue to fly domestic missions as well involving refueling, medical missions and troop transports while their contingent is serving overseas.