You are here: Home / Agriculture / USDA report: value of Iowa farmland up 1.9 percent 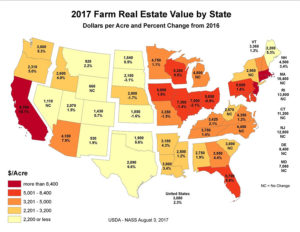 Farmland values in Iowa were up nearly two percent in the past two years according to the U.S.D.A. The other “corn belt” states of Ohio, Indiana, Illinois and Missouri all failed to see an increase in land values.

The U.S.D.A. calculation includes the value of homes and farm buildings along with pastures and cropland in its value measurement. The national average price for farmland is about $3,000.

The USDA calculates the average price for an acre of Nebraska farmland has declined by 1.7 percent from 2015 values. Farmland values are up 9.5 percent in Wisconsin and increased by about one percent in Minnesota.

The other neighboring states of Illinois and Missouri saw a decline of about one-and-a-half percent. In South Dakota, the drop was about three percent.