You are here: Home / News / Governor to treasurer: no need for short-term borrowing 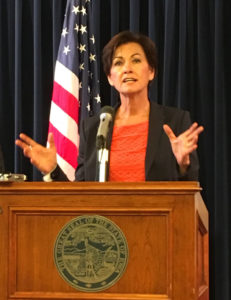 Governor Kim Reynolds says the state does not need to engage in cash flow borrowing to cover the state’s financial obligations next March and April.

“I want to just assure Iowans we have almost half a billion dollars in cash reserves. I don’t think this is a time when we need to be short-term borrowing, ” Reynolds says. “I don’t think it’s necessary.”

State Treasurer Michael Fitzgerald has been arguing the state should borrow a lump sum in Septemer, then it can be invested and earn interest until this spring. That’s when the state enters a lean period, waiting for Iowans to pay their income taxes while still making massive monthly school aid payments and meeting state payroll. Fitzgerald says the state “nearly drained” its cash reserves this past spring during that period.

Reynolds will use her authority to withdraw up to $50 million from the cash reserve this fall to cover any red ink in the state budgeting year that ended June 30, 2017. If the deficit is larger, state legislators will have to reconvene and vote to withdraw more. Reynolds says the accountants are still reviewing the books, waiting for state agencies to turn over any unspent funds and for bills owed to the state before June 30 to be paid.

“I want to just reassure all Iowans that our bills are being paid and have been paid and are being paid,” Reynolds says. “…We’re continuing to collect the facts. We’re doing the due dilligence that we need to be doing so that we can make an informed decision on the procedures moving forward.”

Cedar Rapids Mayor Ron Corbett is running against Reynolds in the 2018 Republican gubernatorial primary. He’s been criticizing Reynolds for the way she and former Governor Terry Branstad have been using the state’s cash reserves this year to cover on-going state expenses rather than make deeper cuts in the budget.