You are here: Home / Agriculture / The future of NAFTA discussed at Iowa Ag Summit (AUDIO) 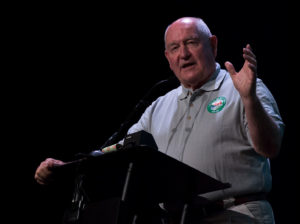 Speakers at today’s Iowa Ag Summit in Des Moines suggested opportunities and risks are ahead as the Trump Administration renegotiates the North American Free Trade Agreement.

Officials from the U.S., Canada and Mexico will convene in Washington on August 16 to begin the first round of discussions.

U.S. Agriculture Secretary Sonny Perdue did not mention NAFTA directly during his keynote address at the Iowa Ag Summit, but Perdue talked about it with reporters afterwards.

“First of all, the principle is: ‘Do no harm.’ Overall, agriculture’s done very well under NAFTA and we hope to continue that,” Perdue said. “There are a few things that need to be addressed, certainly, with Canada and with Mexico.”

But Perdue said “not all sectors have benefitted equally” under the trade deal.

“Our producers in south Florida, vegetables and fruits, have not done as well. Our pork, our dairy, our grain farmers have done relatively well under NAFTA,” Perdue said. “We want to make sure that we have a good, fair deal that’s enforced and we can live with maybe for another 20 years.”

Three Canadian officials spoke from the summit’s stage and each talked about NAFTA. Fred Gorrell, the assistant deputy minister for agriculture in Canada, said the U.S. and Mexico are the “envy of the world” when it comes to the long-standing trade relationship.

“Not only do we trade with each other, we build things together,” Gorrell said during a panel discussion this morning.

Jean-Claude Poissant, Canada’s parliamentary secretary for agriculture, addressed the summit early this afternoon, arguing trade drives the economies “on both sides of the border.”.

The Iowa Ag Summit also covered issues like prospects for the next Farm Bill, but trade policy was at the forefront of the day-long event. Governor Kim Reynolds, the event’s opening speaker, said “trade concerns are troublesome” for Iowa farmers and businesses that export to Canada and Mexico, but she said “modernizing” NAFTA presents an opportunity for the state.

“Our goal is to ensure Iowa’s high quality products continue to move across borders and around the world,” Reynolds said.

Senator Chuck Grassley said American agriculture “has benefitted from NAFTA” — but he warned renegotiating the trade pact will be “more difficult” with Canada than with Mexico.

“There are some areas, like Canadian dairy policy, that are going to be quite a challenge if we try to make changes in that area, but I think it’s legitimate that we try to do that,” Grassley said.

Randy Spronk, a past president of the National Pork Producers Council, noted Canada and Mexico bought more than $2 billion worth of U.S. pork last year.

“As a matter of fact, you add Mexico and Canada together — Mexico is number two and Canada is number four — that’s one third of our exports,” Spronk said.

Senator Joni Ernst said in addition to NAFTA, the Trump Administration must establish new “bilateral” agreements now that the proposed Trans Pacific Partnership has been scrapped.

“If we don’t pursue these trade agreements, I guarantee you that China will,” Ernst said.

And that makes international trade a national security issue, according to Ernst.

Bruce Rastetter, the agribusinessman who hosted and organized today’s event, told reporters during the lunch break that open markets are critical to both farmers AND Iowa manufacturers.

“One of the negative outcomes of NAFTA has been the loss of jobs in rural Iowa,” Rastetter said.

Rastetter also announced the next Iowa Ag Summit will be on March 3, 2018 and he plans to make it an annual event.

Panelists at this weekend’s ag summit discussed water quality, too. One panelist suggested federal crop subsidies should only be provided to farmers who engage in conservation practices. Others discussed how to provide “accountability” and measure progress.