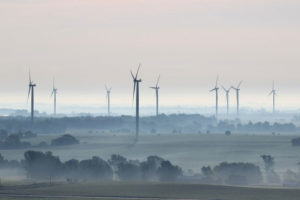 Alliant Energy is seeking approval from the Iowa Utilities Board (IUB) for another wind project.

Company spokesman, Justin Foss, says they expect to hear a decision on the proposal in early 2018.

“We want to add another wind project that could be up to 500 megawatts of new wind energy here in Iowa….that amount of wind could power 215,000 homes,” Foss says. He says they don’t have an exact location set for the new wind turbines if they are approved.

He says they are in the process of developing sites and are going through the development of a couple of different wind projects right now. Foss says this project would add to a 500 kilowatt project under development that was approved in 2016.

Foss says the two combined projects would create a gigawatt of electricity that would provide power to a total of 430,000 homes. He says they would expect to have the most recent project completed by the end of 202 if they receive approval from the IUB.