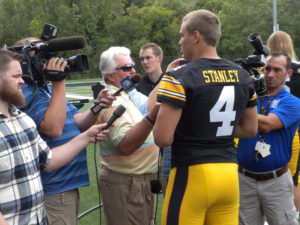 Nathan Stanley is in a battle for the starting quarterback job for Iowa as they prepare for the season opener.

The sophomore from Menomonie, Wisconsin was the backup quarterback last season and is trying to beat out Tyler Wiegers for the starting role.

“Competition just breeds success, so we’re just pushing each other each day trying to get better,” Stanley says. His approach is simple. 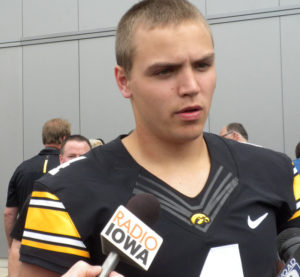 Winning the job also means getting used to a new offensive coordinator. Stanley says it has not been a big change.

He says there’s a lot of concepts that are similar to last year, and much of the change involves terminology. Stanley feels he’s becoming more and more comfortable with the offense with each practice.

Stanley says they installed a lot of stuff in the spring and a lot of that carried over, making it easier as they got into the fall. The coaches say they don’t know exactly when they will make a decision on the starter, but say both quarterbacks have been competing hard.