You are here: Home / Education / UNI president lays out tuition scenario based on possible state funding 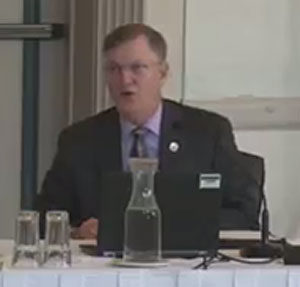 The Board of Regents Tuition Task Force heard from the president of the University of Northern Iowa on the school’s 5-year plan for tuition today.

UNI president Mark Nook laid out three scenarios on how tuition might be impacted based on the amount of state funding given to the Cedar Falls school.

He says the first scenario has state funds increasing at the rate of inflation and allows them to keep tuition increases low.

“If our state appropriation increases at the inflation rate…we would have a need of a 3.9 percent tuition increase followed by 2.7, 1.75 and 1.75,” Nook says. He says in scenario two the revenue would remain the same and that would require an increase in tuition of 6.7 percent in 2019, followed by increases of 5.2 percent, 3.7 percent and 3.1 percent.

The final scenario he presented would see state support cut at the same amount in the next year that it was cut this year. “The state appropriation that has the decrease of 2.3 percent and then flat — we’d bee looking at a nearly 12 percent increase in tuition next year,” Nook says, “followed by five, 3.5 and then 2.9.” Nook says these three scenarios give a good picture of how the school can keep tuition affordable with some added state help.

“These tuition increases are predictable, they’re there. Our question is are they reasonable? Are any of them reasonable, which are reasonable,” Nook asks. “I would argue that the last one is not a reasonable tuition increase to ask our students to take on. Twelve percent in one year, followed by nearly five and then 3.5 and three. Quite steep. Or, annualized at 5.7 per year.” Nook says the university is taking steps to keep education affordable with some increase in funding from the state.

“We’re putting forward a very conservative budget — hold the fiscal year expenses at the inflation adjusted 2008 levels — very few universities can do that, it’s what we’re projecting we’re going to try to do,” Nook explains. “From that we establish revenues so that tuition increases can be reasonable and predictable for Iowa families.”

The Tuition Task Force will hear from Iowa State University Wednesday and the University of Iowa next Monday.