You are here: Home / Agriculture / EPA chief in Iowa to talk about recrafting ‘Waters of the U.S.’ rule 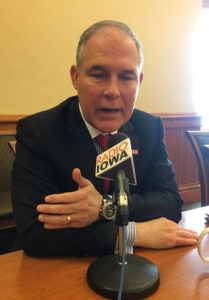 The Environmental Protection Agency’s administrator is in Iowa today for meetings with farmers and state officials. Iowa is the 18th state Scott Pruitt has visited as his agency considers a new “Waters of the U.S.” rule to replace regulations drafted by the Obama Administration, but put on hold by the courts.

“When the EPA defines a ‘Waters of the United States’ as being a puddle, a dry creek bed and an ephemeral drainage ditch, then clearly they were misplaced,” Pruitt said this morning, “and they have not provided great certainty to landowners.”

During an interview with Radio Iowa, Pruitt said his goal is to provide “regulatory clarity” with a new rule, so property owners will know where federal jurisdiction begins and ends.

“If you want to build a pond on your land,” Pruitt said, “if you have natural springs on your land and you want to want to water your livestock and build (a retention) pond…and you’re not really sure whether if you do that you’re going to be subject to $37,000-plus a day in fines if you don’t get a permit and you find it out five years from now, what does that mean? You don’t build the pond or you don’t build the subdivision or you don’t use your land the way you want.”

Pruitt suggested his agency will align its substitute Waters of the U.S. rule with a U.S. Supreme Court opinion that outlined “traditional notions” about what streams, rivers and wetlands should be subject to federal Clean Water Act regulations.

“The goal is to help folks in Iowa know that they’re not under the threat of the EPA coming in and saying: ‘Gotcha!’ five years from now and trying to assess hundreds of thousands of dollars in fines for the use your own land,” Pruitt told Radio Iowa.

“As I talk to farmers and ranchers, I first want them to understand that I see them as partners,” Pruitt said. “I see them as co-partners in achieving good outcomes and that they’re going to take care of the water that they have on their land and that they desire to do so.”

A draft of a report about climate change that was written by scientists in the E-P-A and a dozen other federal agencies was leaked to the New York Times and the newspaper published a story on the report late yesterday. Pruitt told Radio Iowa he hasn’t reviewed the scientific report and could not comment on it.