You are here: Home / Sports / Experience has slowed the game down for Cyclone QB 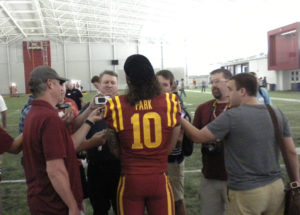 Jacob Park talks with the media.

Jacob Park hopes to complete a rarity at Iowa State: Start and finish the season as the Cyclones’ starting quarterback.

The native of Charleston, South Carolina, began last season as the back up to Joel Lanning before taking over as the starting signal caller the final five games.

He finished 2016 with nearly 1,800 yards of passing and 12 touchdowns and says the experience has helped his confidence.

“It’s really big, I got comfortable, I got used to it….I think I watched more film than these coaches have in the last 6 months. I know the game, I know what we’re trying to accomplish. Hopefully I can get to the point where I can actually call plays,” Park says. 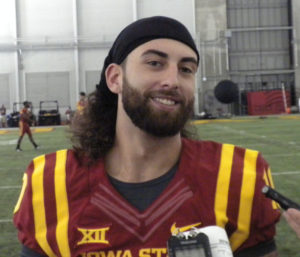 The redshirt junior began his college career at Georgia and feels much more comfortable in his second year with the Iowa State program. He says he comes out every day to see if he can be perfect, not great or good.

“I want to be perfect with every read, every decision, every throw. I’ve been pretty close a few times. My preparation has put me at a whole other understanding of the game an it’s fun,” he says.

He says his expectations for this season are much higher as he says the game has slowed down for him — making it more fun and more like high school again.

Park will have plenty of weapons at his disposal with experience at running back and receiver. He says with the receivers he has, anyone can make a big play and that make his job easy as it will be hard to cover any of them.