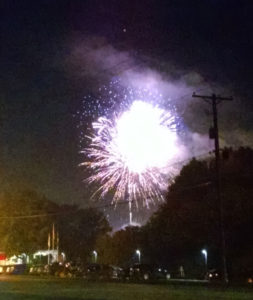 The Newton City Council may make some changes to their fireworks ordinance after hearing Police Chief Rob Burdess and Fire Chief Jarrod Wellik review Monday how things went during the July 4th holiday.

The city ordinance limited fireworks use to between 9 a.m. and 11 p.m. on July 4th. Burdess says they were inundated with 189 fireworks complaints before and just after the holiday. He says the police department worked with the fire department in anticipation of a large number of calls.

“They responded to some of the calls when we were tied up. There were times when we were 15 calls backed up on fireworks complaints,” Burdess says. “So, obviously when you are looking at that amount of backlog — there’s no way we were going to be catching anyone in the act of doing this. We’re just constantly chasing our tail.” Chief Burdess said one serious firework injury was reported. It happened July 4th and involved a child.

He says a firework that was supposed to go straight up went sideways and landed on a child’s chest. The child was severely burned and taken to the University of Iowa Hospitals burn unit. The Police Chief claims there was a significant increase in runaway pets…specifically around the 4th of July. He noted firework debris fell on private and public property throughout town, but no fires were reported. He said there were some fires outside of the City limits. At-Large Council member Miranda Kulis says she reported a dangerous situation where kids were shooting fireworks at each other across traffic on a street.

“And I know it stopped very quickly, but it happened. So there are different pieces where regardless of what infractions we put on it, there’s still going to be some mistakes made. And hopefully some of the novelty of owning them and being able to shoot them off will have died down before the next Fourth of July,” Kulis says. Second Ward representative Evelyn George drew some laughs when she said she learned July 4th, how popular fireworks are.

“My concern is those people who started on June one and disregarded their neighbors for that long of a period of time,” George said. She says that’s why she things it’s important to find a way to enforce the ordinance for those who are so blatantly ignoring it. Fire Chief Wellik and Police Chief Burdess don’t expect as many problems over New Year’s Eve when it is legal again to shoot off fireworks. Mayor Mike Hansen says he is going to host four town meetings to give residents an opportunity to provide input on the fireworks issue. Two of the meetings will be in September, with two more in October.