You are here: Home / Agriculture / Reynolds says EPA chief pledges to partner, not dictate to farmers 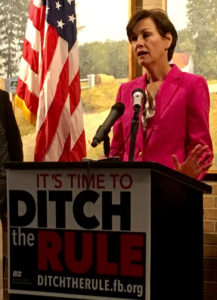 Iowa’s governor, the state’s ag secretary and both United States Senators were among those who met privately today with EPA Administrator Scott Pruitt.

Pruitt’s agency is rewriting rules that clarify which “Waters of the United States” are subject to federal regulation. Governor Kim Reynolds said Pruitt pledged to partner with farmers rather than dictate to them.

“To maintain the environment as well as work to not shut down growth and our ability to do what we take very seriously,” Reynolds told reporters late this morning, “and that is feeding the world.”

The governor said Pruitt indicated the new regulations would define what areas are not under federal jurisdiction. A court suspended the “Waters of the U.S.” rules written by the Obama Administration before they took effect, but Reynolds said farmers delayed conservation measures and other land improvements because of the uncertainty about what might come next.

“Dramatically had an impact on our ability to move forward with conservation practices for not only water quality, for soil health,” she said during a news conference.

The EPA administrator spoke with Radio Iowa early this morning, before his private meeting with Reynolds and others at the Iowa Farm Bureau Federation headquarters in West Des Moines. Iowa Farm Bureau president Craig Hill said the “Waters of the U.S.” rule developed by the Obama Administration was loaded with “ambiguous terms.”

“Every farmer has a different topography and they want to know if their grassed waterway or if their terrace complies with federal law,” Hill told reporters.

Senator Chuck Grassley said the Obama Administration’s rules would have required farmers to get federal permits for “normal farming practices.” Senator Joni Ernst said it’s important to rewrite the rules because they impact not just farmers, but all property owners.