You are here: Home / Crime / Courts / Governor says Eldora facility ‘doesn’t need to be shut down’ 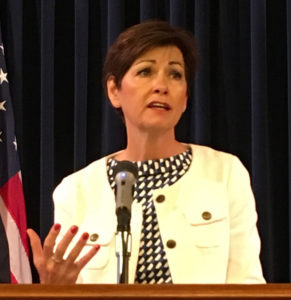 Governor Kim Reynolds says the new director of the Iowa Department of Human Services will “reassess” operations at the Boys State Training School for juvenile delinquents and there’s no need for an outside investigation.

A non-profit group called “Disability Rights Iowa” has raised concerns about a lack of mental health counselors and the use isolation and “body-wrap” restraints at the Boys State Training School in Eldora. Reynolds says the facility “doesn’t need to be shut down.”

“They’re continually trying to look for opportunities to make sure that the kids that are there have the adequate services,” Reynolds says. “But you know this is a tough, tough population that has committed some very, very serious crimes and so they’re looking at how best they can manage that.”

Jerry Foxhoven is the man Governor Reynolds hired in June to take over the Department of Human Services. Back in 2013, Foxhoven led the outside investigation of similar complaints about the Iowa Juvenile Home in Toledo for delinquent girls and Foxhoven’s report ultimately led Governor Terry Branstad to close the home. Reynolds says Foxhoven is reviewing these new allegations about inadequate care at the state-run facility for delinquent boys.

“He is the right person at the right time and I have a lot of confidence in him, working with the facility, to address some of the issues that have been identified,” Reynolds says.

The report from Disability Rights Iowa says the mentally ill teenagers sent to Eldora need therapy, rather than the “full body wraps” that are sometimes used to subdue them. The facility uses beds equipped with straps for both arms and legs, then a teenager’s entire body is encased in a Velcro wrap.