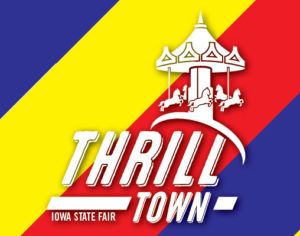 The 11-day run of the Iowa State Fair opens tomorrow in Des Moines and this year, the youngest fairgoers will be able to enjoy rides and games away from faster, taller, scarier rides.

State Fair manager Gary Slater says an area called Thrill Town will include a selection of “tamer” rides, such as the Grand Carousel and Dizzy Dragon.

“Spinning Strawberry, Dumbo elephant ride, that does go up and down in a circle. So rides that are somewhat tame, but ones I think the kids will really like,” Slater said. The kid-friendly rides in Thrill Town will be separated from the rides and attractions geared towards older fairgoers.

“The moms that are watching those kids, and grandmas and grandpas, I think appreciate the fact it’s a separate area. Whereas the big kids and adults aren’t rushing from ride to ride and maybe making things a little bit chaotic,” Slater said. Provided there’s good weather, Slater expects around one million people will attend the Iowa State Fair between tomorrow and August 20th.