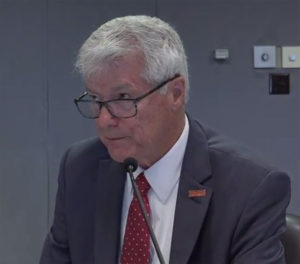 Iowa State University is proposing an increase in tuition for undergraduate residents of 7 percent for each of the next 5 years.

Interim president Ben Allen unveiled the proposal during the second Board of Regents Tuition Task Force meeting. He says the proposed increases are based on a couple of assumptions. 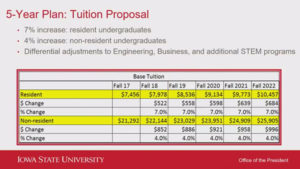 Allen’s proposal recommends a 4 percent increase for nonresident undergraduates and different increases for students majoring in engineering, business and some science, technology and experiential learning programs that have a higher cost of delivering those programs. He says increasing tuition is only part of the plan.

“We are planning to take an even more aggressive approach to efficiency. We are committing to a 2.25 percent in annual cost reallocations,” Allen says.

Allen told the committee enrollment at Iowa State has surged by 37 percent since 2009 — while state funding per resident student has declined 30 percent over the same period. He says the school is starting to lose faculty members because they have not increased their salaries. And he says the increase in tuition would allow them to hire more faculty and drop the student to faculty ratio.

“Even with the prescribe increases, we will still remain one of the most affordable AAU institutions by far,” according to Allen. He says the tuition proposal assumes that the school would not get any new money from the state in each of the next five years — but says ISU will continue pushing state leaders to increase funding.

“Our students deserve it, and frankly our state needs it,” Allen says. “The state can’t expect 128,000 Iowans to earn post-secondary degrees over the next eight years to meet the state workforce needs while at the same time shifting much of the burden of the cost of public higher education to the students and their families.”

The proposal would add $522 to the base tuition of resident students starting in fall 2018.