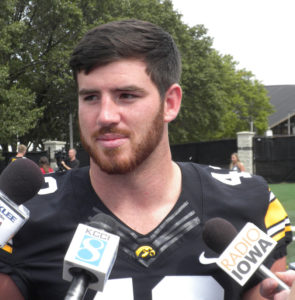 A veteran linebacking crew will lead the Iowa defense this season.

The trio of Josey Jewell, Ben Niemann and Bo Bower have combined for 118 games in a Hawkeye uniform. The September 2 opener against Wyoming will be Jewell’s 31st consecutive start at middle linebacker and he says that experience helps when it comes to making reads.

“The first day out there is going to be rough –everything is going to flying especially a freshman just coming out of high school — and then there’s a huge change from just even a couple of months,” Jewell says. “So I think every time you go on the football field you see something faster, you recognize formations, things coming out of the backfield. It just comes faster every single day.”

Jewell says as he enters his final season he is still a work in progress. “Everybody can always improve, I think I have a lot of things to improve on. Whether it’s pass defense, rushing the quarterback, tackling. There’s always things to improve on, you are never perfect at your craft,” according to Jewell.

Several young players are expected to play a significant role for the defense and Jewell says it is up to all the veterans to provide leadership. “I don’t know if I do anything individually,I think it’s just more of a team effort. We all help everybody out… try to teach the guy what to be able to to. If somebody sees something on tape that wasn’t right and nobody else corrected it, you try to come up to him and tell him what he did wrong and how to improve it,” Jewell says.

Jewell is on a number of preseason watch lists as one of the top linebackers in the country. He has also been named a preseason All American and preseason All Big Ten by a couple of publications.