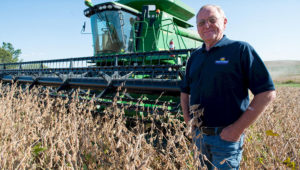 Scientists says the largest-ever dead zone in the Gulf of Mexico is now about the size of New Jersey. They blame nutrient pollution coming primarily from farms, as well as urban and suburban runoff.

“It’s definitely disturbing,” Schnell says. “In Iowa, we like to talk about our one water situation. We’re all responsible for the water, whether it’s urban or industry or agriculture. In Iowa, we’re doing some really innovative things, developing watershed plans that are developed by the local community, by the farmers.”

Schnell says his group is working with a coalition to come up with legislation to address water quality and runoff issues. “We did not get it passed in last year’s legislature,” Schnell says, “but this year, we’re going to have a very innovative and complete bill to allow funding for watershed projects to be developed that are going to make a significant difference in our water situation, at least our farms.”

Schnell says farmers have been — and are continuing to be — environmentally-responsible because they use water just like urban residents.

“Farmers want clean water, too, and we’re doing our part as best we can,” Schnell says. “We’ve made a big difference over these last few years. It is an issue, especially in Iowa. We have very high organic soils that, in heavy rain periods, release nitrates whether we apply fertilizer or not.”

The runoff affecting the dead zone is what’s known as non-point source pollution and is not federally regulated. It’s also difficult to control.