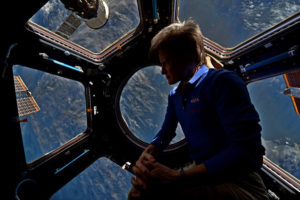 Peggy Whitson in the cupola of the ISS. (NASA photo)

Iowa-born astronaut Peggy Whitson will be staying aboard the International Space Station longer than first expected.

The Beaconsfield native’s third stay aboard the station is now in its tenth month. Originally scheduled for an April return, NASA opted to extend her stay through early September.

In an interview from the orbiting station, Whitson says the decision to remain aboard was a coincidence, brought about by a recent crew change.

“The Russians decided they were only going to have a total of one crew member instead of the normal two they would have on board — two or three,” Whitson says. “So, during that time period, we wanted to have a crew of three on board, instead of just two crews. So, I agreed to stay on and come home aboard the next Soyuz, the subsequent Soyuz.”

Whitson says the longer stay aboard the ISS hasn’t produced any noticeable changes in her health or body. She is, however, bracing for her return to Earth and an adjustment from weightlessness to gravity.

“The first couple of days are difficult from a neurovestibular perspective,” Whiston says. “Then after that, even though I maintain my muscle strength I think very well doing all the exercises we do up here, I find that the fast-twitch muscles — the things that require faster response times — are slow to pick up and remember that you’re back on Earth.”

In space, she says, things don’t require a lot of speed or motion to get moving, so those muscles “forget” how they’re supposed to work. Whitson says her prolonged mission will add to NASA’s continuing study on the impact of long-duration space flights on humans. That will help in preparations for future flights to the Moon or beyond.

“Right now, we’ve got a pretty good database of six-month flyers on board the station,” she says. “The natural extension is important for us, particularly if we go on trips to Mars, when those trips may last anywhere between six and nine months just to get there.”

Whitson says we need to have a good understanding of how our bodies are going to respond once we get back to a gravity environment and an understanding of what happens over time. Back in April, Whitson became the all-time record holder for cumulative time spent in space by a U.S. astronaut. She had already logged 377 days in space from two previous space missions before her latest flight.

Whitson was asked how she felt to be included among other legendary astronauts, like Neil Armstrong, John Glenn, Alan Shepard and Sally Ride. “I’m not sure I’d put myself in that same category,” she says. “But, I do think that having records, breaking records all the time is important for NASA. It shows that we are still progressing, we are still doing new things, and continuing to expand on what we know about space. It gives me pride to be a part of that.”

Whitson also holds the record for most spacewalks by a female astronaut, with ten.