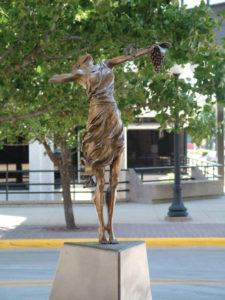 Goddess of the Grapes.

For the second time in nearly two years, a bronze sculpture has been stolen for its pedestal in downtown Sioux City.

“The Goddess of the Grapes” was taken in September of 2015, but less than a week later it was back in place. Todd Behrens, the curator of Sioux City’s Art Center, says the sculpture vanished again a couple of months ago.

“We held off making some kind of public announcement because the last time it happened, as mysteriously as ‘The Goddess’ was taken, she reappeared,” Behrens says. “And so, we thought: ‘Well, let’s just give it some time. Maybe the person who took this time will have the same change of heart as the person did two years ago.”

The Art Center has now filed a police report on this latest theft.

“Two years ago, after it was returned, we worked with the artist to create something a little more secure, so there would have been a little more of an effort required to have taken her this time,” Behrens says. “Obviously, it’s still not as secure as it needs to be, so when she returns we’ll have to rethink both how she’s displayed and where she’s displayed.”

The sculpture depicts a woman who’s holding grapes and reaching to the sky. The statue, which is 18-inches tall, is worth about $4000 and was purchased seven years ago by a non-profit group that placed sculptures in Sioux City’s downtown area.