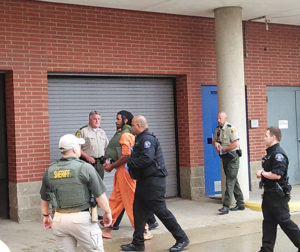 The man accused of killing a deputy in an escape from the Pottawattamie County Jail plans to change his plea.

The Pottawattamie County Attorney says a lawyer for Wesley Correa-Carmenaty informed them he will change his plea to guilty.

Correa-Carmenaty allegedly shot deputy Mark Burbridge to death May 1st and wounded another deputy after grabbing one of their guns as he was being moved following a court appearance on an unrelated murder charge. He used a jail van to escape and was later caught in Omaha.

Correa-Carmenaty’s trial had been set to begin Tuesday, but it will now be a change of plea hearing.

A news release from the prosecutor’s office says no plea bargain was made and that Correa-Carmenaty still faces charges that include murder, attempted murder, escape and kidnapping.  He is being held at the Woodbury County Jail in Sioux City.