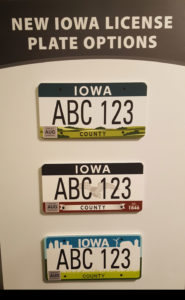 Governor Kim Reynolds said her office and several state agencies provided input to the graphic designers in the Iowa DOT who were responsible for coming up with the three alternatives.

“The three new designs represent what makes us special as Iowans,” Governor Kim Reynolds said. “We’re patriotic. We’re forward-thinking. We take pride in our state’s natural beauty and embrace both our rural and urban heritage.”

You may vote for your preferred design here: iowadot.gov/StateFair/PickAPlate.aspx.

The current Iowa license plates have been in use since 1998. They’re blue and white and feature a city and country image. One of the new options is red, white and blue — the colors of the state flag — and includes the image of the eagle that’s in the center of the flag. The design has been dubbed: “Flying Our Colors.” 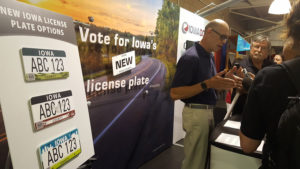 “Narrowing down the choice to just three designs, that was not even easy,” Reynolds said. “It’s extremely difficult to try to represent all the great things about Iowa on a small, 12-by-6 inch plate.”

Another plate design option is called “The Great Wide Open” and has a graphic image of a summer landscape. The third design is called “City and County Reboot” and has silhouettes of the Des Moines skyline, a barn, a grain silo and a wind turbine.

“These designs were created by professional graphic artists who are dedicated state employees of the Iowa Department of Transportation, so our own are designing these new plates,” Reynolds said. “They’re talented individuals who worked hard to really capture the core and the essense of our great state.”

In addition to online voting, Iowa State Fairgoers are being allowed to vote on the designs in the Iowa DOT’s booth at the fair. New plates with a new design will start being issued sometime next year. “Specialty” license plates and plates with a collegiate design will not be changed.