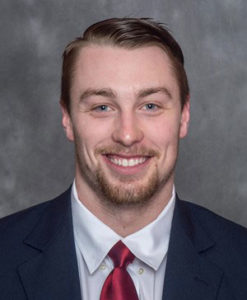 Joel Lanning is entering his fifth and final season at Iowa State but every day offers a learning experience for the native of Ankeny.

After starting 14 games at quarterback the last two seasons Lanning was moved to defense during spring drills and he entered fall camp as one of the Cyclones’s starting linebackers.

“This past spring I felt very confident, I just started reacting instead of thinking,” Lanning says.

Lanning is actually enjoying the additional freedom that comes from playing linebacker. He says playing quarterback makes him feel like he’s stuck in a little area where he has to just hand off the ball or throw it.

“But when you are a linebacker, you are all over the place running around and hitting people, so it’s a good time,” Lanning says.

As Lanning gets more comfortable at his new position he says the Cyclones are more comfortable enter their second season with Matt Campbell as coach. He says they’ve had a great offseason and this fall they all know the system and just have to execute and perfect what’s going on during practice.