You are here: Home / Fires/Accidents/Disasters / Tanzanian children ready to go home after months of treatment in Sioux City 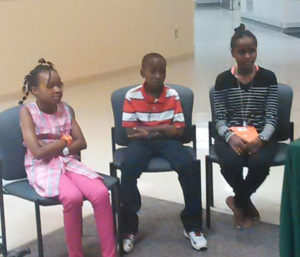 The 3 children thank those who helped them recover.

Three Tanzanian children who were flown to Sioux City for medical treatment after surviving a bus crash that left more than 30 people are about to head home.

Wilson Doreen and Sadia joined their mothers at a farewell reception Thursday at Mercy Medical Center. Twelve-year-old Wilson Tarimo thanked the Stem Medical Missionaries who rescued them from the May 6th bus crash in Africa, and then those who treated her in Iowa.

She thanked all the doctors and nurses who who helped here recover. Doreen suffered spinal injuries and could not move her legs when she was flown to Sioux City.

She can now walk with crutches after being treated at Mercy and at Madonna Children’s Hospital, and is expected to be able to run in three months. She also thanked all of those who helped her.

Mercy Marketing Director Matt Robbins says the entire Siouxland area was greatly impacted by the children as they got to know them the last several weeks.

“Three months ago when Sadi, Doreen and Wilson and their families and friends came to us here in Sioux City — they kind of came to us as strangers — and now a few months later, they’ll leave not only as friends, but also family as well,” Robbins says. “They are part of the Mercy family, but also the family here in Siouxland.”

The children and their mothers will fly back home next week.