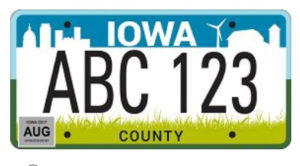 One of the new plate designs that updates the old design.

The Iowa Department of Transportation employee who designed the new license plates posted on social media about the criticism she’s received since they were unveiled last week.

Graphic designer Christina Andersen says in a post on Facebook that some 5,000 people have made negative comments on-line in the 48 hours since the three designs were unveiled last Thursday and she says they indirectly told her that her work sucks, she has the talent of a third grader and should be fired. 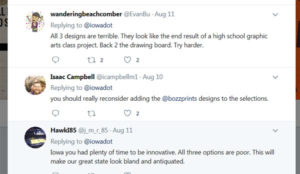 Tweets about the plate designs.

Andersen says she was restricted from designing a full color plate that Iowans wanted because the numbers on the plate have to be easily read by police. And cost constraints do not allow for embossed letters to be used on the plates.

Andersen says the criticism “ranges from stinging to an absolute gut punch that leaves me short of breath and tears flowing uncontrollably.” She says artists know their work will be criticized, but asks that people be more thoughtful.

You can see the plates and vote on your favorite plate design at the Iowa State Fair or online.