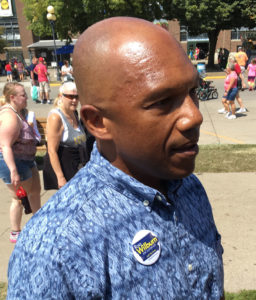 Another contestant has formally entered the competition for the Democratic Party’s 2018 nomination for governor. Fifty-two-year-old Ross Wilburn currently lives in Ames and works for Iowa State University Extension.

“I’m asking the citizens to elect me, to give me the honor to help Iowa lead again — leading in education leading in health care,” Wilburn said this afternoon, “becoming the state that we know we can be.”

Wilburn previously served a dozen years on the city council in Iowa City. In 2006, he was the first African-American to be elected mayor of Iowa City.

“We welcome people here in Iowa. That’s what we do, no matter what you do or your background, but there are some disparties that need to be addressed,” he said.

Wilburn, who is a Davenport native, joins seven other Democrats who’ve been campaigning for governor this summer. Like his Democratic competitors, Wilburn supports repeal of GOP changes to Iowa’s collective bargaining law for public sector workers as well as a $15 minimum wage. Wilburn said Iowa cities and counties should have the authority to enforce a higher minimum wage, too, something Republican lawmakers have forbidden.

“I’ve talked to Democrats, Republicans, independents (and) Greens all over the state and they’re just kind of surprised by the bills that came out of the legislature under Republican leadership,” Wilburn said, “so it’s for those reasons that I’m wanting to put my name out there, to get people involved.”

Wilburn kicked his campaign off today with a news conference at the Iowa State Fair.