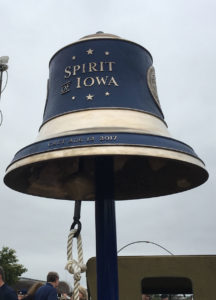 There was a ceremony at the Iowa State Fair this morning to unveil a newly-formed 255-pound bell created to honor Iowa veterans and those currently serving in the military.

The “Spirit of Iowa Tribute Bell” was made this weekend by a mobile foundry on the fairgrounds. Iowa Department of Veterans Affairs director Jodi Tymeson stood near the bell, which is mounted on a trailer and pulled by a Jeep.

“One of the most asked questions is: ‘Where is the bell going to be?'” Tymeson said. “…The bell will travel on this trailer across this state to communities that will ask to have it to honor their veterans.”

Tymeson’s been getting requests, before the bell was even made. The process started this past weekend, as the nation’s only “foundry on wheels” set out from the Iowa Speedway in Newton with a motorcycle escort by the “Patriot Guard Riders.”

“Saturday, Gold Star and military survivor families along with other Iowans placed bronze ingots into the foundry for melting to form the bell,” Tymeson said. “The bell was cast and hundreds of Iowans watched the pouring ceremony.” 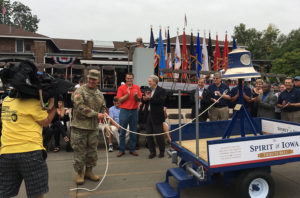 On Sunday, the mold around the bell was broken by fairgoers, then the bell was hidden from the public as it was polished for today’s unveiling.

Governor Kim Reynolds was at the head of a long “rope line” of people who got to ring the bell for the first time. Reynolds said the bell will keep the spirit of Iowa veterans alive as it travels the state in the decades to come.

“Not only is this bell stunning to behold, the meaning behind it is even more significant,” Reynolds said.

After a few teams of bell-ringers had their turn, Iowa National Guard Adjutant General Timothy Orr got a turn by himself. As the clapper struck the bronze, the peal Orr produced was the loudest of the day. Orr told Radio Iowa it was an honor to represent all veterans from all services.

“When you ring that thing, you ring it with a sense of purpose and heart knowing that there are soldiers, airmen, Marines, Coast Guard — all service members behind that,” Orr said.

Orr said “a part of my soul” is in the bell. He threw a bronze coin into the melting pot that was used to produce the liquid metal poured into the bell’s mold. The now-finished two-foot-tall bell was the lead-off entry in today’s Veterans parade on the Iowa State Fair’s Grand Concourse.