You are here: Home / Education / Governor says ‘no way’ to idea of seven percent tuition hikes 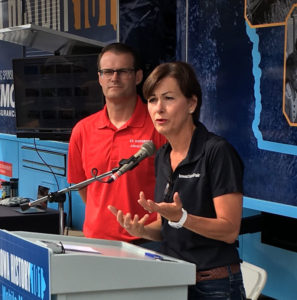 Governor Kim Reynolds is giving a thumbs down to proposed tuition hikes at the three state universities in Ames, Cedar Falls and Iowa City.

“That is too much. There is no way that Iowa families could afford a seven percent increase over five years,” Reynolds said this morning. “And so I would encourage the Regents to, you know, let’s take a look at what’s manageable and keep in the forefront doing everything we can do to keep higher education costs, post-secondary costs down”

The presidents of the three public universities have unveiled five-year-long tuition recommendations. At Iowa and Iowa State, the presidents recommend seven percent tuition hikes in each of the next five years.

The University of Northern Iowa’s president recommends a nearly 7 percent increase in the first year, but it would decline in each of the following years to a hike of just 3 percent in year five. Reynolds pointed out it’ll be up to the nine-member Board of Regents to make the final call.

“Now the Regents will take a look at what’s possible and what’s the right amount moving forward,” Reynolds said during a news conference on the state fairgrounds, “so their work is just getting started and I’m going to let them work through the process.”

Reynolds has ’til the end of January to submit her proposed state budget plan to legislators. The governor told reporters this morning that university leaders should look to renegotiate the pay and benefit packages for campus staff and professors as a way to save money.

“That gives the universities some flexibility to manage the resources,” Reynolds said, “and so there’s also some potential savings.”

In making her argument that seven percent tuition hikes are too high, Reynolds repeated her praise of the previous two-and-a-half year period when tuition was frozen at the schools. Critics, including former Iowa State University president Steven Leath, have argued freezing tuition earlier in the decade pushed his school to a financial “tipping point.”