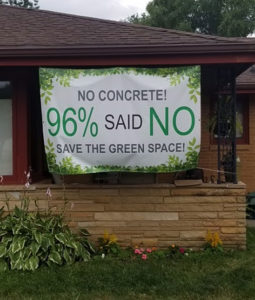 One of the disputed Windsor Heights signs.

The Iowa ACLU says the recent actions by the City of Windsor Heights in the ongoing dispute over new sidewalks are unconstitutional.

Two couples were ordered to remove signs from their properties that were critical of the city government’s handling of the sidewalk situation. ACLU legal director Rita Bettis says Windsor Heights has violated the First Amendment in two ways.

First, the city can’t treat signs differently based on content and she says the city told one of the couple’s to remove their sign only after an anonymous complaint was filed.

“That is something that the courts call a ‘heckler’s veto.’ That regulates the speech that people are able to express, and censures that speech based whether others object to that speech and find it offensive. And that’s something that’s clearly impermissible under the First Amendment,” Bettis says. The ACLU is demanding the City of Windsor Heights allow the homeowners to display the signs.

“We hope that this a straightforward matter,” Bettis says, “that they can take a look at their city code, and their enforcement actions here and see what is pretty clearly a set of constitutional violations actually.” 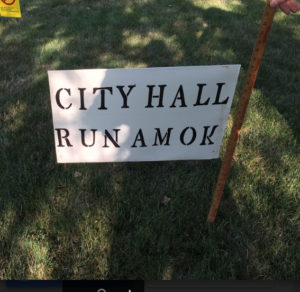 Mike Miller is one of the residents who had a small sign in his yard. “We didn’t really feel it was legal for the city to tell us that we could not have the sign in our yard. And we’re fighting this because we want to make sure that they don’t do this to anybody else that wants to put any kind of sign in their yard –or expressing their opinion in person,” Miller says

The issue of installing sidewalks for the first time in Windsor Heights has been extremely contentious in that community. Many residents object to having sidewalks put in for various reasons and arguments for and against sidewalks in the community have been raging for months.

Emails and calls to the Windsor Heights mayor, city council and staff for this story were not returned.

The ACLU says the city has until next Monday to respond to its letter about the signs.