You are here: Home / Agriculture / Iowa State Fair milk to go down the drain 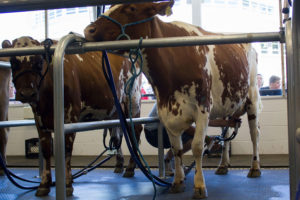 All of the milk collected from dairy cows being shown at the 11-day Iowa State Fair will be dumped.

In years past, the milk was sold to a Des Moines area coop for production into cheese.

This year, however, the longstanding buyer backed out and no one else stepped up. Dairy farmer Doug Lyons of Castalia says it’s a commentary on the larger picture of the dairy industry.

“It’s just a fine way of saying we have too much milk in the country and we don’t have to mess with it, we’re not gonna take the chance,” Lyons says. “That’s why they’re not doing it.”

Dairy farmers at the fair can milk their cows in the popular, window-lined milking parlor. Fairgoers can watch as cows are led into stalls and connected to milking machines. Lyons says it’s unfortunate the milk is all going to waste.

“I did get paid for the milk and it did help, but showing cows is not a money maker,” Lyons says. “It’s more just for advertising the farm.” Lyons says when his herd generates attention at the fair, that can lead to breeding sales down the road. The state fair runs through Sunday.