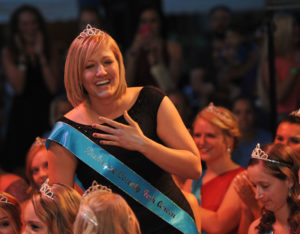 This year’s Iowa State Fair queen is a 19-year-old from Dubuque County who’ll be starting her sophomore year at Iowa State University later this month.

Jackie Ehrlich was among the 104 county fair queens who competed in this year’s event. “It was a lot of fun,” Ehrlich says. “I met so many great people and I was absolutely shocked when they called my name.”

Ehrlich has been a regular visitor and competitor at the fair.

“I’ve been coming to the Iowa State Fair since I was probably six years old,” she says. “I used to do dairy judging team. That was on the Wednesday right before the fair started and then we would have our awards on Thursday and I’ve been in 4H since I was in fourth grade, so I’ve been taking projects to the building for a long time.”

The 4H Building sits on the southwest corner of the fairgrounds, but now that she’s a college student, Ehrlich did not have 4H entries this year. Both sets of her grandparents are dairy farmers and she’s spent time in the dairy barn as well as the show ring.

“I milk cows for my mom’s parents and I show for my dad’s parents,” she says.

At this year’s fair, though, Ehrlich is wearing a sash and crown, dispensing handshakes and ribbons to the victors of a variety of state fair competitions.

“My first activity was called ‘Monster Arm Wrestling,'” she says. “It’s intense. It was really cool.”

Ehrlich says her goal for the remaining six days of the event is to encourage visitors to experience the “energy” on the fairgrounds.

“There’s so much to see and do,” Ehrlich says, “so I hope that they are open and ready to look at so many new hobbies and cultures and things.”

Ehrlich hopes to be a researcher when she graduates from college. Her major at Iowa State is agricultural biochemistry, with a minor in nutrition. She will represent the Iowa State Fair for the following 12 months at exhibitions and county fairs around the state.