You are here: Home / News / Expert: Cicada-killing wasps are harmless (unless you’re a cicada) 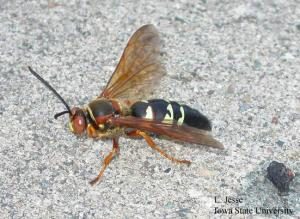 Noisy cicadas have been buzzing around Iowa for weeks and now cicada-killing wasps are also circling our yards, picking off the big bugs.

Entomologist Jody Green says the wasps are not aggressive like bees or hornets, but they are hunters and it’s only the female of the species that goes after cicadas.

“She’s gotta’ fly out and hunt and catch them. They catch the cicada and paralyze it with their venom. She drags it back to the burrow and she’ll lay an egg on it. The larvae will emerge, consuming that cicada as food, keep eating over the winter and emerging the next fall. Circle of life.”

The cicada killers may be up to two inches long with black with yellow markings on the body and rusty-colored wings. They’re the largest wasps in Iowa.

Green says the male wasps typically aren’t the attackers but they might give you a good scare.

“The males are fakers, they’re aggressive though and they’ll fly right up in your face,” she says. “They’re territorial so they’re defending their territory from other males and they’ll attack them. It looks like they’re attacking humans but they really have nothing behind that stinger. The female, on the other hand, does have venom behind that large stinger but she uses though that for prey, not for people.”

This type of wasp burrows into the ground, sometimes as deep as two feet.

“When there are a lot of cicadas and a lot of (wasp) nests, sometimes people want to control them but it’s really difficult,” Green says. “I’d recommend they do that at night and they treat each individual burrow with a pyrethroid dust, but normally, there’s no control necessary.”

A better course of action is just to leave the wasps alone and they’ll usually treat you likewise.