You are here: Home / Education / Des Moines schools plan walk to get kids back on track to graduate 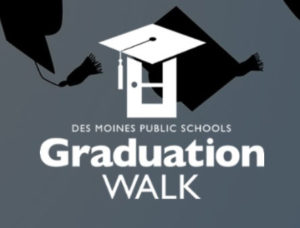 Iowa has one of the nation’s best high school graduation rates, but Iowa’s largest school district is lagging behind.

Next weekend, hundreds of volunteers will be paired with staff from Des Moines Public Schools for what’s called a Graduation Walk. Kate Bennett, the community impact officer with the United Way of Central Iowa, says they’re targeting about a thousand students.

“We go out and visit homes of students in 6th through 12th grades that are identified either as having missed more than 10% of school in the previous school year,” Bennett says, “or for the high school kids, we visit the students that are undercredited, so, not on track for graduation based on the number of credits they have for the year that they’re in.”

They’ll also seek out students who’ve already dropped out and will encourage them to return. She says most kids appreciate the effort by the volunteers. Research shows one caring adult can change a young person’s behavior and re-engage them at a time when they need support the most.

“It’s not a hard sell when you just talk about it from the perspective of the community cares about you, we want you to succeed and we’re here to listen,” Bennett says. “If you have barriers because of transportation, if you’ve had a health issue that kept you out of school and now you feel far behind.”

There may also be mental health issues with the student or a family member, or sometimes even the parents themselves are the barriers to the child getting to class. Studies find a high school dropout is three times more likely to be unemployed than a college graduate. Missing just 10% — about 18 days — of the school year can drastically affect a student’s academic success. Poor attendance in the first month of school often sets the trajectory for the year.

“There’s alternative ways to graduate,” Bennett says. “We have online classes. We have night classes. There are multiple pathways to graduation. Oftentimes, they just don’t know about those.” While the state’s high school graduation rate is 92%, the rate in the Des Moines metro is only 81%. The Graduation Walk is in its eighth year and Bennett says over the past decade, the metro area’s graduation rate has already bounded by ten-percent.

“We still have pockets of at-risk kids that don’t graduate and that are at risk of dropping out,” Bennett says. “We want to keep doing this until we get to — at bare minimum — 95% graduation if not higher.”

The Graduation Walk will be held in Des Moines next Saturday, August 26th. It will involve about 300 volunteers and 150 school employees, as well as business leaders, community leaders and Congressman David Young.