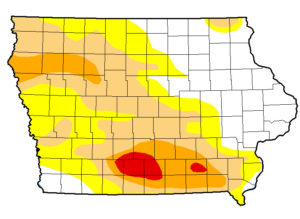 Rain has hopscotched through the state this week and Iowa Ag Secretary Bill Northey says the precipitation is coming at a make-or-break time for soybeans. This is the time when the beans are forming inside the pods on soybean plants.

“(For) a lot of those beans, that rain could make the difference between 20-bushel beans and 55-bushel beans,” Northey says.

In 2016, the average soybean yield in Iowa was 60 bushels per acre. A US.D.A. report issued yesterday concluded seven southern Iowa counties are now in “extreme drought.” Overall, 70 percent of the state is considered to have some level of drought conditions. Northey says “most of the state” needs a soaking rain.

“I’m sure roots are using every last drop of water there is out there,” Northey says. “…It’s a pretty amazing thing to think you’ve got a kernel of seed corn that was planted the end of April and now it’s got a 10 or 12 foot stalk out there…I’ve talked to folks who’ve found roots eight foot deep, going after that moisture that we had this spring.”

LaVerne Arndt farms near Sac City in northwest Iowa, one of the driest spots in the state.

“That July hot spell really cooked our crops,” Arndt says. “I think we’re looking at on corn a 50-75 percent loss from last year, which I understand was a really great year.”

But Arndt says his soybeans still have the potential for good yields with timely rains. Kurt Olson farms near Grand Mound in east-central Iowa. He say his crops are doing well.

“We’ve been getting moisture where other people haven’t,” Olson says. “(Compared to) anywhere else I’ve been in Iowa, we look really good.”

Olson farms in Clinton County. Much of northeast Iowa where heavy rains and flash flooding hit recently is out of the drought zone. However, portions of Clarke, Decatur, Lucas, Madison, Union, Warren and Wayne Counties are rated in “extreme drought” by the U.S.D.A.’s latest report.