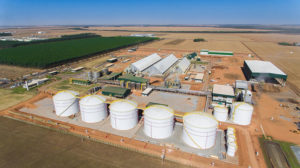 An Iowa businessman has returned from Brazil where his company helped the country open its first large-scale corn ethanol production plant known as FS Bioenergia.

Summit Agricultural Group CEO Bruce Rastetter, of Alden, says Brazil has previously made most of its ethanol from sugar cane. But the country now has gone to a two-season crop system that has increased the amount of corn available.

“Because of the weather and the rainfall they have been able to move to produce a crop of soybeans, and plant the corn the next day in January and February when harvest the corn in May and June,” Rastetter explains. “So that ability has allowed them to grow to significant corn production on second crop — which allows the opportunity for corn ethanol.”

The $115 million ethanol plant will annually process 22 million bushels of corn and produce more than 60 million gallons of corn ethanol along with 6,200 tons of corn oil and 170,000 tons of feed rations for Brazil’s growing livestock industry.

Rastetter says the plant keeps the additional corn production in Brazil — which is good news for Iowa. “For them to produce value in their country — producing energy with it and also then the high-quality livestock feed alongside of it — is probably pretty important to the American farmer when we see large grain surpluses here in the U.S.,” according to Rastetter. He says Brazil already uses more ethanol than the United States, as their minimum ethanol blend with gasoline is 27-and-half percent compared to 10 percent in the U.S. And he doesn’t expect the increased ethanol production to hurt the U.S.

He says the U.S. exported about 500 million gallons of ethanol to Brazil last year and the number is increasing. And while their home produced ethanol might cut into that, he says other countries like China, Europe and those in Southeast Asia will use more ethanol in the future. Rastetter says exporting ethanol is not the problem here, he says it needs to be offered in more blends at the pumps like Brazil.

“The U.S. needs to move form 10 percent to 15 to 20 percent ethanol blends. That’s the problem for the industry, it’s part of the problem for agriculture,”Rastetter says. “Over the last eight years we haven’t seen ethanol use increase in the U.S., production go from 12 billion to 15 billion gallons.”

Rastetter says the new plant used some parts that are only made in the U.S. along with some production expertise from a company called ICM Incorporated of Colwich, Kansas. He doesn’t think this will be the only modern ethanol plant built there.

“We have terrific support from the government..the president of the country as at the inauguration as were a number of ag businesses, farmers and governors. So, we are excited about the opportunity,” Rastetter says. Rastetter’s company partnered with a Brazilian firm known as Fiagril to build the plant. They broke ground on the facility in early 2016