You are here: Home / News / Roller coaster lovers meet in Arnolds Park to ride The Legend 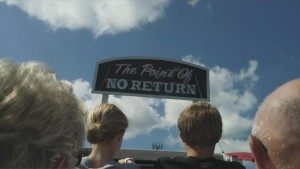 The point of no return on The Legend roller coaster.

Around 125 members of the group American Coaster Enthusiasts (ACE) are meeting this weekend at Arnolds Park in northwest Iowa.

“It’s a group that just loves coasters, from their name you can tell that,” Plumb said. “They do travel to different amusement parks every summer…and this will be the second time they’ve chosen us, I believe, since I’ve been here.”

ACE previously held their summer conference at Arnolds Park in 2006. Members of the group are considered roller coaster experts and they take vacation time every summer just to check out various thrill rides.

“They’ve been on many, many coasters all over the nation and the world,” Plumb said. Arnolds Park will open a little earlier than usual tomorrow morning exclusively for ACE members to ride The Legend and a few other rides. The Legend is one of the oldest wooden coasters in the U.S.

“It’s going to be 90 years old here in just a couple of years,” Plumb said. “We just recently went over a three-phase improvement to the ride, put over a million dollars in it, and just updated it to today’s standards. We have one more phase to go that’ll be finished in the next couple of years and make it completely remodeled at that point.” Arnolds Park and The Legend roller coaster are located on the West Okoboji Lake shoreline.

The ACE group will travel to the Valleyfair Amusement Park in Minnesota on Sunday. Plumb says The Legend was designed by John A. Miller and it carried its first thrill seekers in 1927 – although, at that time, it wasn’t called The Legend.