You are here: Home / Business / State unemployment rate holds at 3.2% in July 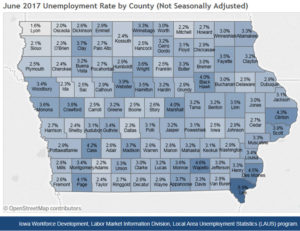 The state unemployment rate held at three-point-two percent in July.

“We saw growth, especially in Iowa’s manufacturing industry posting job gains for a third consecutive month in July. This is also the third month in a row Iowa’s total non-farm employment has increased — picking up a total of since April,” Kelly says.

“Across the year health care has been a driving force in job growth in Iowa. It added 6,900 jobs in the past 12 months, even after this month’s slight decline in that sector,” he says. The construction industry had been pushing jobs up — but it saw a slowdown with a loss of 2,300 jobs in July.

Kelly says construction is down 4,400 jobs so far this year as the industry falls off its record pace last year with some large scale projects ending. The July unemployment rate one year ago was a half-a-percent higher at 3.7 percent.

The unemployment rate has held at just above three percent for most of this year. It started out at 3.4 percent in January, dropped to 3.2 in February. It dropped again in March to 3.1 percent, and held there until moving back up to 3.2 two percent in June.

The federal unemployment rate in July dropped slightly to 4.3 percent.