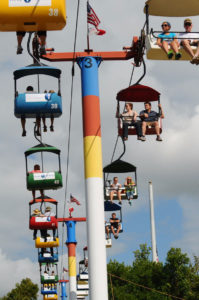 “We actually had eclipsed the total number of people from a year ago through Saturday evening and so that kind of relieves you a little bit,” Iowa State Fair CEO Gary Slater said this afternoon. “But we still had a great day on Sunday, having 94,000-plus.”

The 2017 Iowa State Fair attracted nearly 13,000 more visitors than it did in 2015. 2015 is the year the previous attendance record of a little more than 1.1 million was set. Slater said this year’s 11-day-long fair was held during “nearly perfect days for an August in Iowa.”

“Mother Nature deserves a lot of credit every year, no doubt,” Slater said, “either negative credit or, this year, positive credit.”

More than 40,000 ribbons were handed out during the fair’s livestock shows, its unique contests and in more than 900 different classes in the food competition. The fair took a different approach to its amusement rides in 2017 and created a separate section for young kids.

“People loved it,” said Slater, who has been the State Fair’s top executive for 17 years. “Those 12 rides and two games were just enough for a family to have a great time and not have to worry about the hustle and bustle of the main midway.”

The State Fair Midway along with the stage in the Grandstand are targeted for renovations now that the 2017 fair is over.