You are here: Home / Human Interest / Strange sky show is this afternoon as Iowans eye eclipse 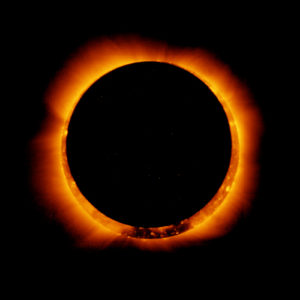 Many Iowans are taking the day off and heading west or south to see this afternoon’s total eclipse of the sun from Nebraska or Missouri.

Much of Iowa will see a partial eclipse as the moon comes between the earth and the sun, but the experience promises to be more spectacular in neighboring states.

Jack Gabel, a physics professor at Creighton University in Omaha, says most Iowans will still have a very unusual view at midday.

“The sky will be darkened and it’ll be like a deep twilight,” Gabel says. “You will be able to see stars in the sky.”

It’s a rare event. It’s been 99 years since the last eclipse traveled the width of the U-S from the Pacific to the Atlantic. For those Iowans who want to see the full eclipse by making a road trip to the Lincoln, Kansas City or St. Louis areas, he says some see this as a Bucket List-level opportunity.

“The disc of the sun will be entirely blocked out, it’ll be like there’s a big black hole where the sun was and surrounding that disc will be this ethereal, ghostly light, these streamers, that’s the solar corona,” Gabel says. “You can only see that corona during the time of the total eclipse so it’s a really special thing to see.”

Iowans will be tempted to steal a glance at the sun, but Gabel says you should only do so while wearing special solar eclipse glasses or you could have permanent eye damage.

Gabel says, “The only time that it will be safe to look at the sun without any eye protection is if you are in that special, 70-mile wide swath of land only during the brief one-to-two minutes of totality.”

The moon will start to creep into the path of the sun over western Iowa around 11:30 this morning, while the majority of the sun will be covered between 1 and 1:15 this afternoon, with the event ending in eastern Iowa by about 2:30.