You are here: Home / Crime / Courts / Fugitive caught while trying to watch the solar eclipse 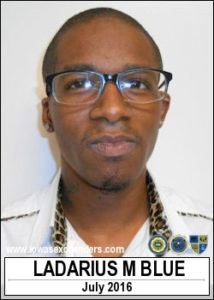 Twenty-six-year-old Ladarius Blue of Waterloo was being sought for failing to register as a sex offender. He’d been unaccounted for since early June. According to a news release from the marshal service, Blue was seen exiting a home in Cedar Rapids in “what appeared to be an attempt to observe the solar eclipse.” Blue then ran as he spotted approaching law officers.

He was captured a short time later when a citizen called police saying a man was hiding into their yard waste container.

Blue is being held in the Linn County Correctional Center. where he faces additional charges. The Iowa Sex Offender registry shows Blue was convicted of lascivious acts with a child for an incident in Fayette County in 2010.